The Laowa 50mm f/2.8 2X Ultra Macro APO is the first lens with 2:1 maximum magnification being optimised for Micro Four Thirds (MFT) cameras. It equips with an apochromatic (APO) design in which the chromatic aberration is eliminated. The built-in chip and motor allows aperture to be adjusted via the camera body. The compactness and lightweight also make this an ideal choice for macro and outdoor photography.

Unlike most of the MFT macro lenses in the market which can focus only up to 1X, the new Laowa 50mm macro lens offers a 2X maximum magnification ratio along with a minimum focusing distance of 5.3” (13.5cm). It is the first lens ever designed with a 2X magnification for MFT cameras.

Being equipped with a CPU chip and motor, the aperture can be adjusted via the camera body. The focus magnifier would automatically be enabled, when rotating the focus ring, for easier focus control. The lens data can also be recorded on EXIF.

An apochromatic (APO) design has been adopted and therefore the chromatic aberration at both in-focus and out-of-focus areas are controlled to the minimal in its class. It greatly improves the sharpness, clarity and colour accuracy of photos.

The 50mm lens is extremely compact and light in weight. It measures 3.1” (79mm) long and weighs only around 8.4oz (240g). It would be the perfect set up for outdoor shooting.

With the success of the Laowa 65mm f/2.8 2x Ultra macro APO launched earlier for APS-C cameras, the new 50mm lens is specially developed for MFT mirrorless camera users and it can be used on MFT cameras from Panasonic, Olympus, BMPCC 4K, etc. 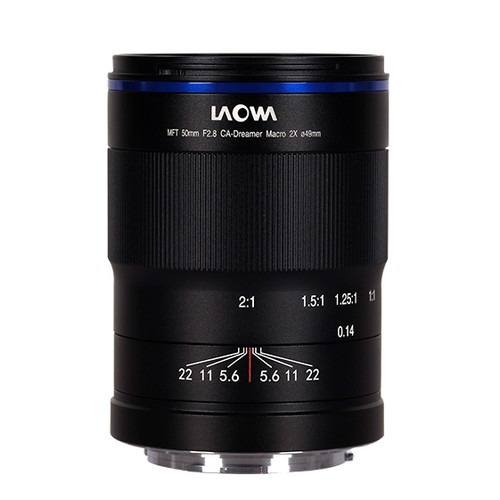